Could Adobe have a new Challenger?

For years Adobe hasn’t had much competition in the photo editing, vector drawing and desktop publishing application space. Adobe software has been the pinnacle of desktop publishing software for as long as I can remember. A few years ago they switched their software model to subscription-based which upset a lot of their core customers. Now a company named Serif has come out with a new product called Affinity Designer to try to change all that. Serif Ltd. is an independent developer founded in 1990 and a publisher of design software. Serif was founded with the aim to develop low-cost alternatives to high-end desktop publishing and graphic design packages for the PC. Despite developing exclusively for PC and Windows for over 25 years, their new product, Affinity Designer, is turning that all on its head. Built for the Mac, Affinity Designer is the first of a new line of products by Serif aimed at anyone who’s not a fan of Adobe subscription model. Affinity Photo and Affinity Publisher will be coming out over the next 12 months to complete the new suite of design applications. Affinity Designer is available now in beta and you can grab your copy for Mac at https://affinity.serif.com/. 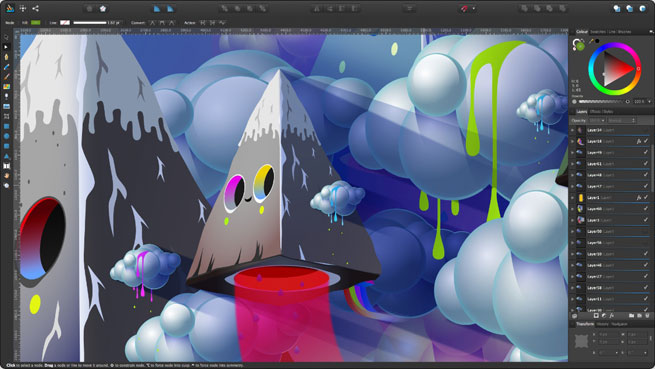 Affinity Designer’s site says that “Affinity Designer is the fastest, smoothest, most precise vector graphic design software available.” Whether you’re working on graphics for marketing materials, websites, icons, UI design or just like creating cool concept art, Affinity Designer will revolutionize how you work.” and “Working in Affinity Designer is always live – pan and zoom at 60fps, transform objects in correct z-order, make adjustments or apply effects in realtime and always see live previews of brushes or tools. Whether it’s a 100 megapixel image or the most complex vector drawing with thousands of curves, it’s still the same and never runs out of memory.” When Affinity Designer is out of beta it will be available exclusively on the Mac App store for $49.99.

We are still a long ways from seeing if Serif can knock off Adobe’s crown but it’s nice to see that some alternatives are starting to pop up. If you’ve tried Serif’s new vector drawing application, please let us know what you think about it in the comments. I will be trying it out soon myself and giving a report on OUaS.