Okay I know this subject doesn’t really concern becoming or being an artist but nevertheless Facebook has become integral in to being an artist these days. From communicating with potential clients to just talking with other artists I find myself on it almost every day. It’s actually one of the ways our team at Once Upon a Sketch stays in contact. We have a Group discussion where we keep everyone up-to-date and when we are just communicating person-to-person we use Facebook messaging. Which brings me to why I’m writing this post. Like most of you I probably use Facebook mostly on my phone and just a little while ago the Facebook app required me to install a additional app called Facebook Messenger if I wanted to continue messaging. Some people might say well Facebook just spent $19 billion to buy a company called What’s App. Facebook must just want to get their moneys worth. This statement may be true but there seems to be a lot more going on if you dig into the terms of service accompanying this application. You may have already read about this somewhere else on the Internet but it needs to be reiterated since Facebook has now made this application required to use their messaging service. Here are a few of the permissions you will be giving up if you use the new Facebook messaging app. These are word for word from the Facebook messaging app terms of service.

The list continues but this is just a handful of the choice quotes from the terms of service floating around the Internet these days. It’s worth pointing out that while these terms sound awful a lot of the permissions wording is taken straight from Android’s terms. FaceBook maybe just following the Android wording, just a bit of speculation to give Facebook some credit. Also, Apple iOS only asks for these permissions when a user tries to access one of these functions such as microphone access only being requested when a video/voice call happens. It still sounds like pretty scary permissions to give any app or company in my opinion. Especially a company who makes their money by learning everything they can about their users.

I had a friend over for dinner just the other day and she had unknowingly downloaded this app when her regular Facebook app prompted her to. I’m sure she blindly agreed to the terms of service like everyone does and didn’t even think about what she had agreed to. It so easy to do. It feels like you can’t do anything on the Internet these days without agreeing to something. So if your one of the one billion people who have downloaded this app please be careful. It may be nice to use a free application that lets you stay in contact with your friends but please remember the things you’re giving up by using it. 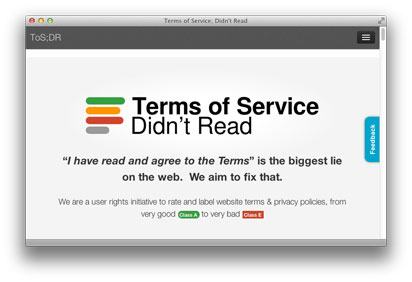 Do you ever wonder what you are agreeing to when you just click the ‘agree’ button on all of the terms of service agreements on social networks or web services? I normally don’t. I just agree and move on, but what if you were signing away the rights to your images, photos, and content? As an artist this is a scary thought. It’s hard to tell what your signing up for these days unless you want to read a 30 page document. “I have read and agree to the Terms” is the biggest lie on the internet or so say the organizers of a new site call ToS;DR. Not the catchiest name, but the name is inspired by the internet acronym TL;DR which means “Too Long; Didn’t Read”. The site is still pretty new so you might not find the social network or web service you’re looking for. ToS;DR is a crowd sourced site that takes the lengthy terms of service agreements on websites and breaks then down into a convenient bulleted list. The best part is they write in plain english removing the legal jargon. The site doesn’t claim to give legal advice and says “we express our opinion with no guarantee and we do not endorse any service in any way.” Their work is funded by non-profits and individual donations. The information gets released as free software and open data.
END_OF_DOCUMENT_TOKEN_TO_BE_REPLACED