When I’m not working in Photoshop I spend my time with Sketchbook Pro. As I was trying to figure something out with a tool in Sketchbook Pro I came across their YouTube page and found some great videos of artists using Sketchbook and as can easily happen when searching for one thing on the Internet you find something you never intended.

The first video I got side tracked by is from Asuka111 and this demo is called Bike Craft. Asuka111 starts with Sketchbook on the iPad and then brings the drawing onto Sketchbook Pro on their PC to finish it up.

END_OF_DOCUMENT_TOKEN_TO_BE_REPLACED

Like most digital artists Mike Krahulik of Penny Arcade fame had been looking for ways to do his drawings on the go. He tried an iPad and that just didn’t work for what he was trying to do. Next he gave the Microsoft Surface Pro Tablet a shot at one of the MS stores. After giving it a test drive he mentioned on Twitter that he was interested in the Surface Pro as a drawing tablet. Microsoft provided a preview unit for him to test out and he made this video of him creating a drawing of one of the Penny arcade characters.

I personally have been looking for a mobile drawing solution and would love to find a great product to draw on. Krahulik said of the Surface Pro, “As a mobile solution for a digital artist I’d say the Surface Pro is a winner.” This is the second artist I’ve heard give their endorsement of this product. I first got excited about the Surface Pro when I heard that MS was using Wacom tech in their screens. One of the main drawbacks he ran into was Photoshop not supporting pressure sensitivity (at this point). So Krahulik used sketchbook Pro to complete his illustration. Sketchbook Pro and Manga studio five have pressure sensitivity available for the Surface Pro. Mike also said “Sketching with the Stylus in Sketchbook was awesome. It’s important to note that you CAN lay your hand on the screen while you draw without messing up your work. There was no brush lag at all and the pressure sensitivity worked perfectly. The stylus itself felt exactly like drawing on my Cintiq except that the Surface screen is smooth whereas the Cintiq screen has a bit of texture to it.” Being a Sketchbook Pro user this certainly has me excited. And trying to figure out how to trade in my iPad for a Surface Pro tablet. 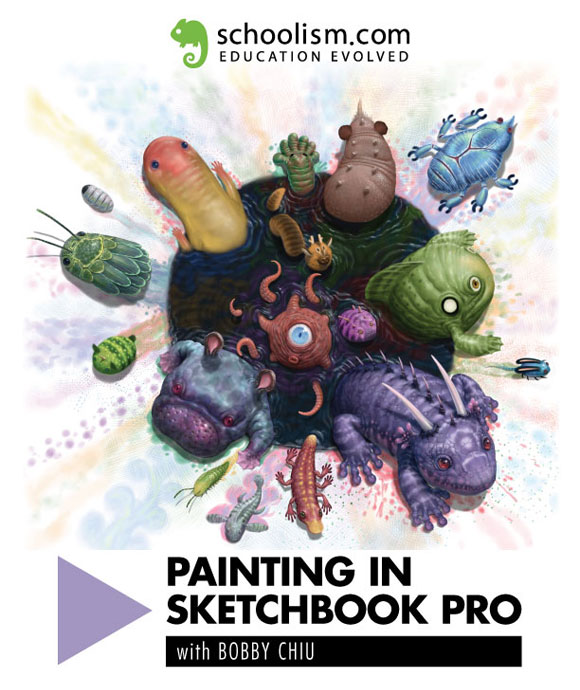 Watch concept artist Bobby Chiu paint the new cover art for Sketchbook Pro 6. He starts off by walking you through a very basic tutorial, so if you’ve never used sketchbook before this is a good place to start. He shows you how to use and set up brushes and then moves to showing you all the controls and what they do. After the basic walk-through he gets into the meat of the video and starts his process for creating the cover art for SBP6. Bobby moves into more of his thought process of what it takes to create a drawing which I found very helpful. I always like getting a glimpse of what goes through other artist’s heads when creating their art.

From sketch to finish Bobby shows you step-by-step the entire piece and how it was created. If you’ve got a free hour to sit down and learn sketchbook I would really suggest starting with this video. It’s very helpful. I even learned a few things and I’ve been using this program for the last 3 years.

Today I received an email from Schoolism and Autodesk highlighting a new bonus tutorial video from Bobby Chiu. In the video he demonstrates how to add highlights and scales on a fictional creature using Sketchbook Pro. Of course, I watched it immediately because I am a big fan of both Sketchbook Pro and Bobby Chiu. Should’ve known Mr. Chiu would be releasing training videos using sketchbook with him having created the box art for Sketchbook Pro 6. To watch the full 10 minute video tutorial follow the link here to Schoolism’s blog or watch the video below after the break.