Getting a Critique: When to Listen, When to Move On

Since it’s back to school time for many of us, I thought I’d focus on an old-school aspect of the illustrator’s journey: the critique. We all get them (if we’re smart) but how do we know what to listen to? I know seasoned illustrators who still ask this question. Over the years I’ve queried various illustrators about when they know how to listen and I’ve gotten many of the same answers.

Here’s when you tune in with all ears… and more than a grain of salt:

• When it’s someone in the position to move your career up a notch and you respect their opinion. That seems like a no brainer but notice I said AND. We often listen to one or the other. If it’s someone you respect but they don’t understand the particular industry you are approaching, then they may not be in the best position to offer advice. Likewise for someone who buys art… you may change your piece to fit their expectations but what if your long term goal is illustrating in a different field?

• When more than one person has mentioned the exact same problem, especially if it’s someone you trust, then it’s worth listening to.

• When the critique mentions a problem you already suspected was there in your heart of hearts….. you should listen, you were probably correct when you worried about it the first time.

• When it points out a way to get more story into the illustration, and it’s the story  – the intent of the piece – you are trying to tell, then listen.

Here’s when you consider smiling and saying, “thanks, I’ll think about it.”

• When the advice seems in conflict with the story you are trying to tell. Like my last bullet, this is also a toughie and demands that you be completely objective about your own work. Are you sure of the story?

• When the critique seems more like a commentary on someone else’s taste. Just because a very respected and highly competent art buyer likes blue doesn’t mean you have to add it to the image IF it goes against the story you were trying to tell.

• When the critique comes from someone outside your particular illustration industry, even if you respect them. This is also a toughie because it’s possible they have sound advice. But before you listen make sure you are educated about the standards in your field. It’s possible that you can bend their advice to work for you.  If, like myself, you are both an illustrator and a writer then that goes double. Some of the best critiques I’ve heard actually came from writers who were adept at thinking visually.

To paraphrase a comment from agent Michael Bourret about writers and editors: “sometimes the worst mistake is to do exactly what the editor asked for… instead of looking for the real problem.” And when it comes to critiques from buyers you are trying to impress but who have rejected the work,  Jane Yolen said it very well in her interview on 12 x 12 earlier this year: “Just because someone offers you a free critique on work they ultimately don’t want, they aren’t taking it! Sometimes it’s just better to forget those.” While it can be hard to get good constructive critiques and equally hard to listen to the criticism, the only way to become good at it is to seek them out regularly. Similar to learning perspective or how to draw the figure, practice is what develops the artists’ ability to receive – and to give – great critiques.

Sample Is Not The Same As Spec

In an earlier post Once Upon A Sketch addressed the subject of being asked to work on spec for a prospective client. Generally defined as creating a sample specifically for an upcoming project, spec (short for speculative) work is often requested by individuals unfamiliar with the industry, impatient to get their book ‘on the market’, and often not offering any payment to the illustrator.  An increasing trend among traditional trade publishers is the process of sampling illustrations. It works like this: an illustrator will get an email from the editor or art director who is late in the process of assigning an illustrator to a manuscript. They will inquire about availability to do the book and ask if the artist is open to creating one or two character samples. They will inform the artist that other illustrators are being considered. While this sounds similar to spec work, I would argue that sampling for a major publisher is not the same as working on spec for a novice or self publishing client.

Here’s how they differ:

• Unlike spec work there is often a small fee paid to the artist. But even in the cases where that is not offered, art director Giuseppe Castellano argues in his #arttips thread on Twitter that illustrators should always take it seriously and return a sample. At the very least the illustrator’s work will be viewed by an art director and the illustrator should get a great portfolio piece out of the process.

• While the novice client really  has no idea how to view a portfolio and decide if the style presented is appropriate, the trade art director has already vetted the artist’s portfolio and has two or three illustrators that  the editorial team just can’t decide between. Particularly in the case of high profile author or celebrity books, editorial needs to know how easy the illustrator is to work with and how sales thinks the art will help position the book.

• The traditional publishing house has other projects in the pipeline. The novice client or self publisher likely has only one. Working on spec has little return on the time invested simply because there’s just not another job to be hired for. Even if you are not chosen during the sampling process with a traditional publisher, your chances of being called on again are greatly increased.

When choosing to be part of the sample process here are some tips an illustrator should keep in mind:

• First of all, if it’s a publisher you’ve never heard of then it’s probably spec work… not a sample. Don’t do it unless you are paid.

• It’s perfectly ok to ask how many other illustrators are being considered and when the publisher expects to make the decision. I’ve even asked the editor to tell me how many people will have to approve the sample.

• If you can’t do a good sample by the time requested, offer something different. Generally an illustrator will be asked for only one color sample of a character but i’ve been asked for spreads as well. In that case I asked if I could do a color character and just a sketch of the spread.

• Even if the art director does not request samples by a certain time, set your own (relatively quick) deadline and then beat it. It’s always nice to show that you are disciplined about meeting a project’s timeline.

• No matter what, go above and beyond in the work you create. After months or years of sending postcards to this publisher you got a call. Now’s your chance to shine.

I’ve sampled for a small number of publishers. In all cases I felt like I was opening a line of communication with a potential client that I had previously only been able to reach through mailings. Even on the projects I wasn’t chosen for, the art directors were enthusiastic about my work and the samples created have gotten me other projects. As Castellano’s #arttips suggest, doing exemplary work for a sample is a small investment of time that can pay big dividends in the future by making a good impression on art directors that are on the lookout for the next great illustrator. 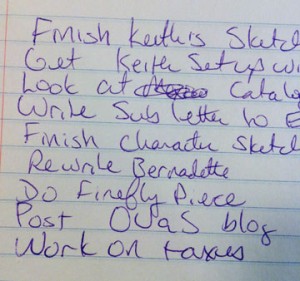 Aaah look at all that creativity, sketches due, finals to work on, a picture book idea to re-write… wait whats that at the bottom? Work on taxes?? (sound of needle screeching on record)

Taxes are something that most people, but especially creative people, shudder about. When I polled several artist friends most admitted to just shoving a bag full of receipts at their accountant. Fellow Once Upon A Sketch contributor Kevin Cross put it bluntly “not everything in this job is butterflies and rainbows.” As a small studio owner you have to do it all, from creating the work to cleaning the coffee maker. Watching income and expenses is just another part of that job. Just like you wouldn’t clean the coffee maker once a year (well you shouldn’t do that,) you also shouldn’t wait til the end of the year to get a clear snapshot of your studio’s financial picture. But many creatives, especially those starting out, are not sure where to start or where to get answers. So I sat down with Laurel Green, principal at Greenbooks, a bookkeeping agency that works exclusively with visionary and creative small businesses, to ask a few questions about tax basics for creatives. She shared her answers below… and even made it sound fun with Financial Foreplay:
OUaS: What are the three absolute must-haves or must-dos that any creative should keep in mind when it comes to preparing for tax time?

LG: First, find a knowledgeable and reliable CPA or Certified Tax Preparer who works with clients in your creative field. Do not use a preparer who is not registered with the IRS or received a Preparer Tax Identification Number (PTIN). Ask friends and colleagues for referrals.

Second, maintain separate accounts. According to IRS Small Business officials, the tax agency is turning its attention to “flow-through entities,” which includes S corporations and sole proprietorships. This means they’ll be on the lookout for business owners who try to deduct the same expenses on different filings. If you haven’t done so already, get a business checking account to match your personal accounts and separate all transactions. It can reduce the chance of an audit.

Third, save every tax form that arrives in your mailbox. Being organized will reduce stress, save time and money, and ensure that you get all entitled deductions.

OUaS: What is the biggest mistake you have seen or know of creative people making when preparing for taxes? How can it be rectified?

LG: Don’t wait until the last minute. Nothing is more frustrating than searching for everything you need when the tax return is due in a couple of days.

The biggest mistake a creative person (any person) can make is bringing a shoe box or manila envelope crammed with receipts to a CPA or Tax Preparer and paying them to organize it for you.

Motivate yourself to sort through your receipts with what I call Financial Foreplay. Pour a glass of wine, light a candle, and dump those receipts on a bed. Organize your records by month, separating them into two categories: income and expenses. Then sort them by type. For example, under the expense category you might have advertising, office supplies, utilities, labor, and taxes to name a few. The more detailed your information is the less time your tax preparer will spend decoding information.  END_OF_DOCUMENT_TOKEN_TO_BE_REPLACED