menu
All posts in News

Letter to Our Readers

Once Upon a Sketch was created in order to share our knowledge of the children’s illustration market with you, our readers and listeners. We started out with four contributors and after six months we were down to two. Since then Wilson Wiliams Jr and I have been working on this site every week, creating posts about the children’s market and trying to share our knowledge and information with you. Wilson and I talked twice a week about the site, how we could improve both the site and ourselves as artists. It was great to have someone to cheer for you, telling you how much they liked your last post and things that you could have added to improve that article. We bounced ideas off of each other, gave each other advice, critiqued each other’s artwork and talked about the latest episode of whatever was on TV that week. It was a really great experience for me. It’s helped me grow so much as a freelancer, artist and as a person. Mostly just reminding me that there are other people out there experiencing the same thing I am, going through life with a pencil and paper always next to you. Sadly, all good things come to an end. Saturday morning, August 17, 2013, Wilson passed away. Wilson had not been feeling well for the last week or so and from the last conversation I had with him, he thought he had food poisoning. Even the day before he passed he sent out this tweet “#foodpoisoning is no joke! May be good for losing a few pounds though…” It’s amazing how life works, one week you’re talking with someone and the next they are gone. It was truly great to have known him. My only wish was that I had the chance to tell him myself.

So what does this mean for Once Upon a Sketch? That’s a good question. I’m not sure. There is so much of Wilson in this site, I’m not sure how to continue without him. For now the site is going on hiatus. Then I will start looking for another contributor/partner to help me run the site. Thank you all for your readership. It was amazing for both Wilson and I to check the Google analytics on the site and see the numbers continuing to grow. Wilson loved that the content we created was out there helping others. I will work hard to help continue this legacy the best I can.

He was one of a kind and will be missed. If you have any wishes or sentiments you would like to leave for Wilson’s family please leave them on his Facebook page.

Yesterday Wacom unveiled their new portable drawing solutions with two new tablets, but not to be lost in the buzz they are also releasing their first pressure sensitive stylus for iPad. The Intuos Creative Stylus is the latest addition to Wacom’s Bamboo Stylus line and it’s first pressure-sensitive iPad stylus. As you probably know by now the iPad screen is not pressure sensitive so to get this effect Wacom has built this pressure sensitivity into the stylus. Using Bluetooth 4.0 the stylus will talk to compatible iPad art apps, which currently include SketchBook, ArtRage, ProCreate, ArtStudio, Inkist, Flipink and Wacom’s Bamboo Paper app. Wacom claims to offer 2048 levels of pressure-sensitivity and says that one AAA battery will power it for over 150 hours. The Intuos Creative Stylus will be on sale at $99 on October 7.

By now I’m sure most of you have already read the Harry Potter books, but did you know that there being rereleased with new artwork from Eisner Award-nominated comic book artist and author Kazu Kibuishi? Well, Kazu Kibuishi is doing new artwork for the books and Scholastic is rereleasing them in a box set on August 27th in honor of the series’ 15th anniversary next year. Now that your up to date, he talked with Bookish about his experience with creating the new covers for the iconic series. In the interview he admits that he was “surprised” that Scholastic approached him about creating the covers for all seven Harry Potter books. In the interview he also talks about Mary GrandPré’s original artwork for the series and how he empathizes with J.K. Rowling. Here is an excerpt from Bookish’s conversation with Kazu Kibuishi. END_OF_DOCUMENT_TOKEN_TO_BE_REPLACED

Earlier this year Wacom put out a vague tweet about a drawing tablet. Then a few days ago this YouTube video appeared showing off a bunch of different Wacom products which also hinted at the “Next Big Thing”. The video ends with the date August 20th, 2013 and the words Wacom’s next Creative Evolution. The video doesn’t give a lot of details, it doesn’t even say what the “next Creative Evolution” is. Guess we’ll just have to wait until August 20th, but just because there’s not a lot of details doesn’t mean I can’t get excited about a possible new mobile drawing solution. Look for our write up on this announcement around the 20th of this month, but for now you can just speculate and dream with me in the comments.

As most of you may know the 42nd Annual Summer SCBWI Conference from Los Angeles is right around the corner, August 2nd through the 5th. Not able to attend the Conference? Well even if you are, you can keep up-to-date with the SCBWI Official blog. Lee Wind leads the SCBWI’s Team Blog for up-to-the minute conference countdowns and live blogging from the conference floor! And now that the conference is sold out this might be a good way to keep up on the goings on at the conference, if you’re like me and not going. Check out the official blog at scbwiconference.blogspot.com

Once Upon a Sketch Podcast Episode 5.5 – Quick Cast

In this edition of the Once Upon a Sketch Quick Cast we discuss projects we’ve been working on, Wilson’s recent computer crash and our thoughts on the conversation we had with Terry Hemphill from Adobe. We also have a contest we’re doing on the Once Upon a Sketch website. For more information check out the link below.

PACT – Professional Artist-Client Toolkit will be a tool to help freelance fantasy, sci-fi, and comic book illustrators negotiate a better living wage for themselves. This Toolkit is the brain child of artists Jim Pavelec, Todd Lockwood, Randy Gallegos, Mike Sass and Aaron Miller. The PACT web tool kit is not a portfolio site, but will be geared towards improving the standards for artists within the fantasy, science fiction, book publishing and comic book industries. They describe this project as “a place where we can learn to be more professional, to promote an appreciation and more respectful attitude toward the work we do, and encourage companies to treat us in a more professional and economically viable way”. If the project is funded it will cost $29 a year but if you back the project they will give you a Two Year Membership for that same price.

If this sounds interesting to you, you should head over to their IndieGoGo page and take a look. The deadline for donations is the 17th of July. Just a day away. Check out the PACT funding site for more information.

Once Upon a Sketch is not endorsing or affiliated with this project. This article is simply informational for people that may not have heard of the project.

Will Amazon kill off the Storyboard Artist with Storyteller

Recently Amazon Studios released a new application called Amazon Storyteller. Storyteller lets scriptwriters upload their scripts and the software turns it into storyboards through an automated process. The free online tool was released on June 7, 2013 and is currently in beta. Here is how Amazon describes their new software.

“Amazon Storyteller is a new application from Amazon Studios that lets you turn a movie script into a storyboard. You choose the backgrounds, characters, and props to visually tell a story. A successful storyboard can tell the full story of a script, or capture its essence in short form, like a trailer. Either approach can be a great way to build an audience for your story and see how people respond to it.” END_OF_DOCUMENT_TOKEN_TO_BE_REPLACED 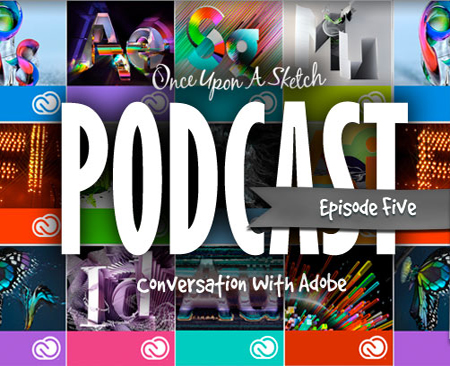 Last month on our podcast we had a roundtable conversation about Adobes new subscription model and it turns out that Adobe was listening. We got the chance to speak with Terry Hemphill a Senior Product Marketing Manager at Adobe. He heard our Conversation and approached us with the intent to speak with us about some of the confusion and concern regarding Creative Cloud. At first we were a little skeptical about speaking with a representative from Adobe. We were afraid that it might just be a long pitch for their products but we found Terry to be very open and honest with his answers. Before we spoke with Terry we put out a request for questions that, if you had the chance, would want to ask Adobe about creative cloud and we got a lot of great responses. Here are a few of the questions we asked him. Thanks for your input;

We certainly got to ask him a lot more but those are just a handful of the questions we asked. Give a listen to the whole conversation to hear everything we talked about.

Audio Version of the podcast or listen on iTunes