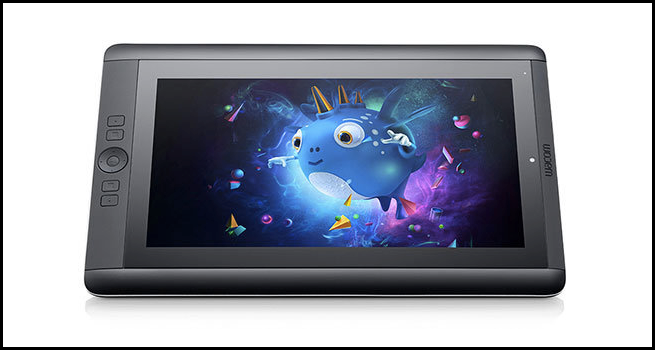 More information about the Wacom Cintiq Companion.
Wacom is the leader in drawing tablets for graphics professionals. Wacom’s products have traditionally been desktop-based until they released the Cintiq Companion in August. The Companion is designed to be the first portable graphics workstation (Thanks Popular Mechanics, I could not have worded that better). It’s not an iPad or an android tablet it’s a full computer inside of a Wacom 13.3in Cintiq. The Companion runs 64bit Windows 8 and has a full HD display with a touchscreen stylus combo with 2048 levels of pressure sensitivity.

So what about the computer inside?
The computing stats are as follows; Intel Core i7 processor, 8GB of RAM, and an Intel HD Graphics 4000 graphics processor. There are also two HD cameras included as well. A two megapixel camera on the front and an eight megapixel on the back. Personally I never find myself using the cameras but I’m sure some people do. The Companion also includes a handful of helpful accessories. They include; A power adapter, an adjustable, detachable stand with three different height settings (it also clips to the back of the tablet), a black carrying case with a amazingly soft electric blue inside (to keep your tablet safe and warm), the Wacom Pro Pen and pen case with nine replacement nibs.

How does it look and feel?
The companion is definitely not what most people would consider a “Tablet” these days. It’s pretty much a full-size computer and with that you’re going to get a larger size and heavier weight. It has a silver band around the outside holding everything together and this is where you will find most of the ports and buttons. On one side you have an orientation screen lock button and a volume up and down button. On the other side you have two USB 3.0 ports, micro DisplayPort, headphone jack, and a microSD slot as well as the power button. Out of all of these ports and buttons the power button is sadly the worst placed. I frequently find myself just bumping the power button and it puts the computer to sleep. I wish they had found any other place for that button. Looking at the Companion straight on you see the 13 inch Cintiq display with its nice matte finish. To one side of the display you have the ExpressKeys and circular rocker button with a Windows button in the middle.

How does the stylus feel?
Well if you use any other Wacom products you’ll know exactly how the stylus feels. It’s comfortable to hold for long amounts of time and feels really good when drawing.
How does it run professional design applications?
For the most part I’ve been using Adobe Photoshop CS6, Sketchbook Pro 6, Manga Studio 5, Adobe Indesign CS6 and Adobe Illustrator CS6 on it and everything I’ve used on it so far works great. The response time of the touch screen and pen display is wonderful. It feels very responsive just like Wacom’s other Cintiq products. There’s a small caveat I have to insert here which is when you get the companion it’s not set to high performance mode. Before purchasing my own I did a lot of research and I saw a lot of reports that if you don’t switch the companion to high performance mode you can get jaggy lines when drawing in Photoshop. I haven’t experienced this myself because once I got it I automatically turned on high performance mode. Like I said drawing on this tablet feels great but it’s when you try to use menus and keyboard shortcuts that the experience starts to waiver. That would be one of my drawbacks to the Companion is that it is based on an operating system that Wacom doesn’t control. Windows 8 is still essentially a point and click operating system. Yes, they have put in a lot of touch based features, for Windows 8 apps, but the Windows desktop still feels like a desktop environment. None of the features in your favorite drawing applications have been adjusted for touch so navigating menus can be more frustrating than it should be and requires pinpoint taps. 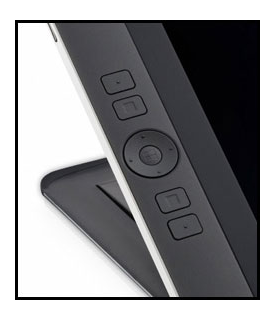 To try to ease this frustration Wacom has made some smart decisions with the ExpressKeys. I never use the express keys on my other Cintiq products, but now having to use the companion on a daily basis it’s become a necessity. The ExpressKeys are found on the front of the Companion next to the display and can be customized to fit your drawing and computing style. For me when I’m using Photoshop I use a lot of keyboard shortcuts, so I’ve mapped the 4 ExpressKeys buttons to be Spacebar, Alt, Shift and Ctrl. There is a circular rocker button breaking up these four buttons which is also customizable. Another Wacom addition is floating menus that can be set up with other frequently used operations such as save, turn on/off touch and adjust brush size. There was a bit of a learning curve for me coming from only ever using Apple products to a Windows operating system, but I’ve finally started to get used to the way Microsoft organizes their operating system. It’s not the most intuitive operating system to me. I had to Google how to add email accounts to the mail app. This should have been much easier but I’m a newbie to Windows.
What’s the competition look like for the Companion?
Like I said earlier I did a lot of research before making this purchase and there’s not a whole lot of competition out there. In typical fashion my wife “asked” me to make a spreadsheet with all the different options so as opposed to explaining all the different options to you here is my spreadsheet. 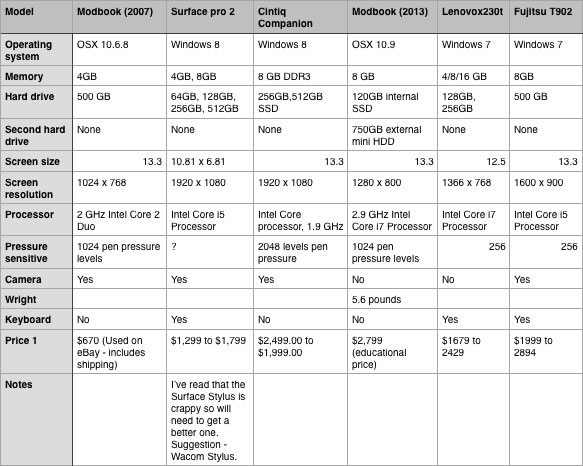 How’s the battery life?
In my experience I’ve gotten 4 to 5 hours on a single charge. Wacom listed at 6-8 hours but you can probably expect a bit less.
My experience
My experience with the companion, for the most part, has been great. When I first got the Companion I was so excited. I’ve been waiting for a product like this for a long time and sadly my first few weeks with it were not the best. When I first got the Companion I couldn’t get it to stay connected to my internet. I tried everything I could think of. I Searched the internets and talked multiple times to Wacom’s customer support. All the other devices in my house with Wi-Fi were connecting fine but for some reason the tablet would connect and then drop the connection and then drop again. It was very strange. Wacom support had me install a new Wi-Fi driver and upgrade to Windows 8.1. All of these things did not fix the problem so I had to send the Companion back. Once I got the new tablet the same problems continued to occur. As a last ditch effort I contacted my Internet provider (Frontier Communications here in the Portland Metro area) and had to adjust a bunch of settings on my router and finally the Companion would stay connected to my Internet. I’m not sure if this has been anyone else’s experience but I just thought I would mention it. Once this happened the computer has been great to use. I installed Adobe Creative Suite 6 and began installing all of my favorite apps. I must say the difference between Windows 8 and Windows 8.1 is huge. There are a ton of great features they’ve added to 8.1.
Should I buy?
Well I guess that depends on each artists’ situation. The Companion isn’t cheap. You can buy it with a 256 GB SSD for $2000, or a 512 GB SSD for $2500. For me having just started a young family and finding myself more and more on the go, a weekend trip to the grandparents house can’t completely halt my busy worklife when deadlines are approaching. The mobility of this device has made it invaluable for me. I guess an another way you could look at it is if you’re looking to buy a 13 inch Cintiq display, Wacom will sell you one for $1300. For an extra $700 you are getting a fully powered tablet computer. Coming from my Apple background thats not too bad. If you don’t need to draw on the go then this is an expensive product to just sit around on a desk, but for me it’s turned into an invaluable product to get my work done. If you have any questions about the Companion please leave them in the comments and we will answer them to the best of our knowledge.