By now I’m sure most of you have already read the Harry Potter books, but did you know that there being rereleased with new artwork from Eisner Award-nominated comic book artist and author Kazu Kibuishi? Well, Kazu Kibuishi is doing new artwork for the books and Scholastic is rereleasing them in a box set on August 27th in honor of the series’ 15th anniversary next year. Now that your up to date, he talked with Bookish about his experience with creating the new covers for the iconic series. In the interview he admits that he was “surprised” that Scholastic approached him about creating the covers for all seven Harry Potter books. In the interview he also talks about Mary GrandPré’s original artwork for the series and how he empathizes with J.K. Rowling. Here is an excerpt from Bookish’s conversation with Kazu Kibuishi.

Bookish: What are you most excited about regarding the “Harry Potter” covers?

Kazu Kibuishi: That I’m done? [Laughs.] I’m excited to go back to work on my own book, but at the same time, as far as the reveals go, I’m of course excited to see how people react. I’m actually most excited to see what people think of the entire set, because that’s really how I was looking at the whole thing. I’m really excited to see what people think of the back covers because that’s something I think that’s going to be unexpected. That was a last-minute thing I threw in there. I wasn’t sure if Arthur [Levine, vice president and editorial director of Arthur A. Levine Books] was going to go for it, but I said, “This is the way to go!” There’s a surprise.

A lot of people have asked me to talk about Mary GrandPré’s work, and I keep telling them, “Look, we wouldn’t know ‘Harry Potter’ without the scenes she envisioned.” She had the most difficult task of defining the look of “Harry Potter.” She has a tremendous amount of influence over what I do and what everyone else does [with the series] from here on out. I tell everyone, my job is easy compared to what she had to do. My job is to be a historian and take a look at how we perceive “Harry Potter”–how Mary actually designed it, and also to find some way to re-introduce it to the readers that I already have on my books. How would my readers want to move into reading this kind of fiction? I would take something from “Harry Potter” that I think my kids would want to see.

If you would like to continue reading the whole interview you can find it here.
Source – http://www.bookish.com/articles/artist-kazu-kibuishi-interview-new-harry-potter-covers

The image below shows all the new covers and one of the images of Hogwarts Kibuishi created for the series’ 15th anniversary. 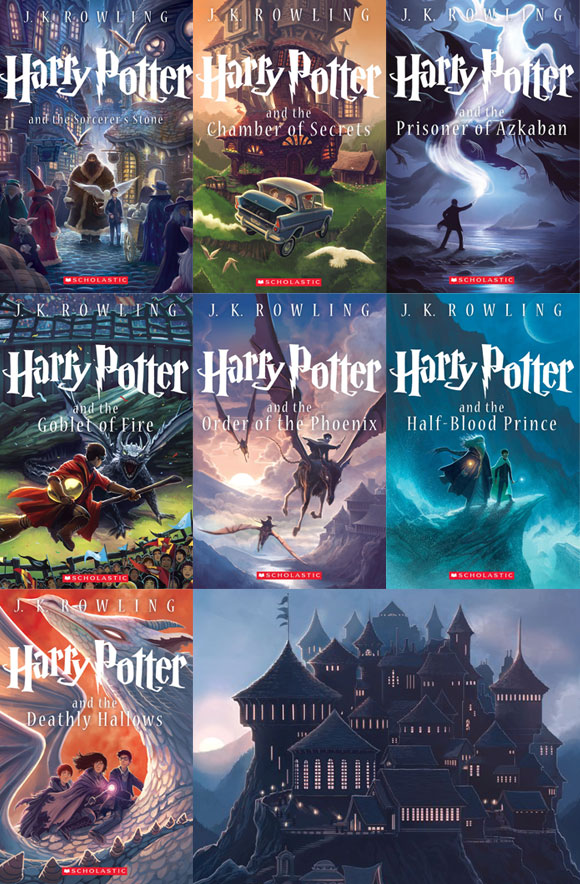