Today we feature a post from Derek Douglas’s Blog. He gives his thoughts on working digitally versus traditionally. Read on to find out which he prefers.

I don’t begrudge those traditionalists who say that you have to be really good at digital work to have it stand up against hand drawn artwork, because they’re right in a way. There is a lot of not so great digital artwork out there. And they may also be right when saying that traditional work is more personal because it’s made by human hands. But isn’t drawing on a tablet still drawing? It’s not the computer doing the work for you while you sit back and enjoy a chai latte. I understand the point but none the less, I have traded worry of spilled ink on the carpet for worry of spilled chai latte on the keyboard and ongoing art store trips and costs for just a few, thousand dollar purchases of heavy-duty hardware for initial set up and away I go.

Before this first children’s book job I painted mostly in acrylics or watercolour and even dabbled in 3-D dioramas with the occasional computer touch up. So you may ask why I changed over. It’s a simple answer really. Time. I know we’re all busy and many artists have done it traditionally for ages, but I chose to work digitally to see if it would speed up the process. Did it? The answer is yes and here’s how:

After agreeing with the publisher to work digitally for sake of time, it has now been a few months of solid work and I’ve discovered that the benefits are numerous! Other than liking the way it looks, I’d say the number one benefit would be the ability and ease to make changes or corrections. If working traditionally, to make a large correction to a painting can be very time consuming with painting over, blow drying the paint and then reworking the section and then counting on getting it right the second time around. Yes, I know I’m sounding like a complete advocate for digital over traditional, but read on. I love my command-Z shortcut on the keyboard, which allows me to “undo” any brush stroke or change with the touch of a button up to the last 50 changes to the image. For example, if I ink Sir John. A. Macdonald’s nose too big, no problem! Press command-Z and Voila! His ugly too, too large nose is gone and I just redraw it, but just big this time. Because I work in layers, (which means separating each element of the painting on to it’s own respective layer in Photoshop) this makes changing colours, moving or shifting characters to the left, right or deleting an element out of the image entirely, easy without affecting the rest of the image at all. Old pros who always get it right on the first try may not care, but I like my “undo button.” 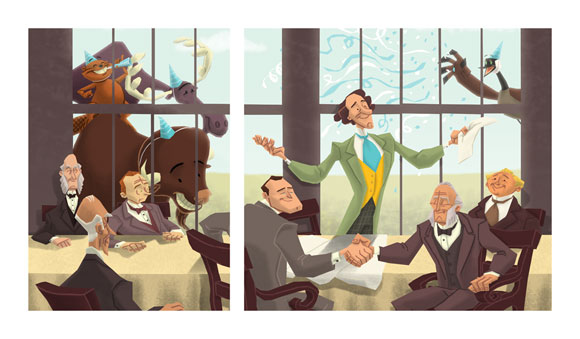 Though I kinda miss the look of a traditional painting and the feel of working with paint on paper, I truly never thought that I would prefer working digitally over traditionally. Getting over that, logically it just makes sense for me in this day and age with deadlines pending and family to spend time with. The ease of changing an illustration while working digitally is good for me, the publisher and is just a push of a button away.