Karen Lee is a divine Illustrator. She holds the honor of being a consistent contributor to Highlights magazine as well as having a number of trade Children’s Books under her belt.

We are oh so lucky that she has agreed to share some of her technique and process on our blog. So get out your pencils and paper it’s time for a lesson folks! Enjoy! 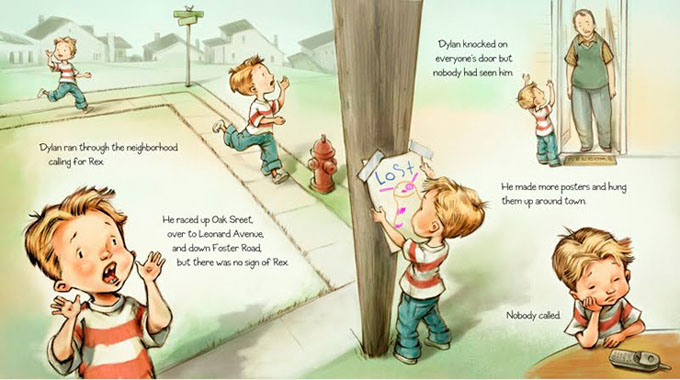 Lately I’ve been exploring my darker side in my development pieces, but that doesn’t mean I’ve quit doing the lighter work. I’ve had several assignments for Highlights lately and have used my digital technique with a great deal more fluency. I’ll do a quick tutorial on one image from a series I did for the June issue.

I had to revise part of the image before I had the go-ahead for final so I pieced it together in photoshop, nudged a few other elements until the composition worked and allowed room for the call-out type. I had scanned it at 600dpi (Epson Perfection V500 for the geeks out there). Once I opened it in Photoshop (again, Geeks – an elderly CS5 on a Mac Power PC OS5, Wacom tablet) I hit command-L (or Image–>Adjustment–>Levels). In the dialog box I select the white eyedropper, set white point as:
I touch it to the sketch in a grayish area and that will set that as my lightest point. I play around with it a lot, select the black eyedropper, set black point and touch that to a dark point on the sketch, move the gray slider on Input Levels until I like the balance. Hit okay. I like to convert it to grayscale at this point also.
After that I clean up the sketch using my favorite sandy textured brush. It is not essential that it is perfect – I continue to tweak that layer throughout. At this point I change the image size to 400DPI.
Now double click on the background layer:
When the New Layer dialog box comes up I rename it “Line” and change the mode to multiply:
With me so far? Now you have your line on an editable transparent layer.  Next I add two layers below the line layer. One I name Background and fill with white (or sometimes a color or texture or gradient, but to keep it simple we’ll go with white now). The other layer I change to multiply (I always name these Multi). Now I get out my good sandy brush and do some quick value block-in on the multiply layer. Like so: 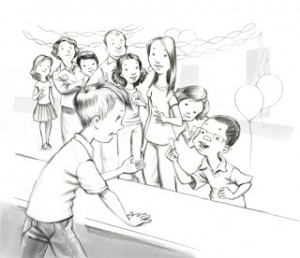 Now I convert it back to RGB, when it asks me if I want to merge layers I say hells no. Now I hit command-U (Image–>Adjustment–>Hue/Saturation). Check the Colorize box: 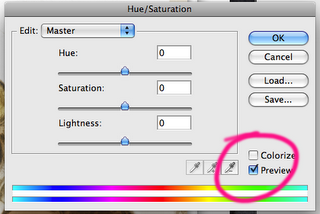 I play around with the sliders until I get a color I like – sepia is typical for me. Ho-hum. The good news is that now I am ready to put some color on it. I make a new layer directly under the line layer and name it “Color” With the sandy brush again I start to block in my color: 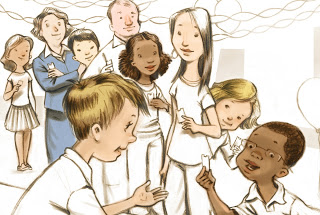 I continue to add color on various layers, block in some color on that long neglected background layer: 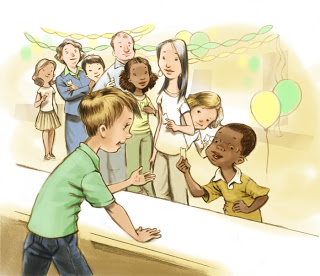 I am extremely layer-happy – I typically use thirty or more layers on an image although I try to merge them when I can. I might put a texture or some details on a layer above another to keep from disturbing the layer beneath – I use the eraser tool set to the same sandy brush to clean up as I go. 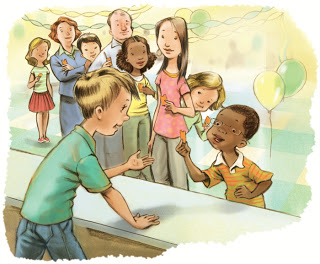 Now I change the image to my final size – usually 300 dpi, change to CMYK if it is for print (sometimes this is a bit panicky when I realize I’ve been using colors out of gamut, good thing I left it in layers first!). Now I save as a layered file (for revising if needed), then Layer–> Flatten, resave as image name/flat.
A few other pieces I’ve done for Highlights in this method recently: 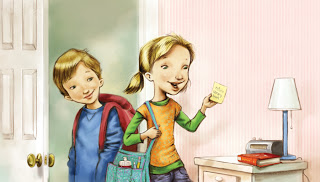 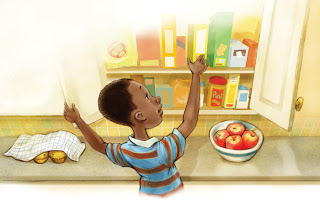 Highlights For Children, May 2012
For more of Karen’s work visit her website or blog.