Children’s Book Illustrator Shirley Ng-Benitez  generated quite a following after she began showcasing her wonderful watercolors online.  We are so lucky and happy that she is sharing part of her journey and with us. Please join us as she recaps her experience at the 6th Annual SCBWI Ilustrator Day in San Francisco.

It’s been six days since the event, and I have enjoyed pausing and reflecting upon all of the information shared from the panel of Martha Rago (Harper Collins Creative Director), Antoinette Portis (author/illustrator of “Not a Box”), Dan Yaccarino (author/illustrator/creator of Oswald, 50+ books), as well as from fellow illustrators Laura Zarrin, Tracy Bishop, Joy Steuerwald, Casey Girard, Sungyeon Joh, Felicia Hoshino, Chiaki Darski, and so many others.

Martha Rago‘s presentation described the typical process of a picture book from start to finish at Harper Collins. She started with the following text by Barbara Bader. I had to write this down as certain things resonate with me when I see them, and this is one…
“A picture book is text, illustrations, total design; an item of manufacture and a commercial product: a social, cultural, historical document, and, foremost, an experience for a child.
As an art form it hinges on the interdependence of pictures and words or the simultaneous display of two facing pages and on the drama of the turning of the page.
On it’s own terms it’s possibilities are limitless.”~ Barbara Bader, children’s literature critic

Martha then described the process of a picture book project at Harper Collins. The project usually begins with the manuscript, next, along with Martha’s creative direction, her internal art department provides mood boards to help determine what type of artist or artwork would be paired with the text. Once the illustrator is determined, the package goes into a business realm where a profit and loss analysis is determined, marketing is brought in, and then I believe she said that is when they bring the project to acquisitions. Once the project is successfully passed through acquisitions and the illustrator is contacted, the illustrator develops thumbnails and then Martha and the illustrator go back and forth with edits/art direction/page layouts/typographic choice, etc. The illustrator then creates final artwork, the book goes to press, and she describes F&G’s and signatures, and completes with the final physical book. In regards to how she views children’s book illustration, she stated that she relies upon using her instincts; comparisons in the marketplace; with a business eye; and how the book fits into a certain market.

She touched on the path of a submission by Antoinette Portis…and the wonderful dummy that Antoinette sent which immediately caught her attention. Martha conveyed her love of the book tremendously. Every project is different from one another and Martha told us that she enjoys the entire process of creating a picture book. She is so very highly-regarded in the industry and it was great to hear her talk about illustration and what makes some very successful at telling a story.

The next presenter was Antoinette Portis. Antoinette described her path of writing and illustrating a dummy for “Not a Box” and how it made it’s way to Martha’s hands. She described how she worked incredibly hard on the book, and how she “knew” deep down that it would be great if it just got out there. She shows the process of the book and the edits it went through and how the voice of the book was retained..that on the left page, the parent speaks, and on the right page, the child responds. 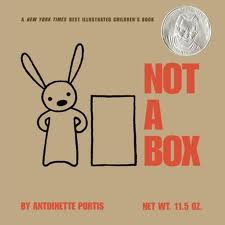 She previously worked as Creative Director of Disney consumer products, is a graphic designer, and she has a huge appreciation for words paired with pictures specifying wonderful ad-work such as the VW ad to help describe words and pictures and how there is emphasis of one versus the other. She described how she struggled with her second book, “A Penguin Story” (struggle with too many words), and presented how she resolved some of the spreads where the pictures told the story, so the text was not necessary.

Antoinette’s wise words: “Kids LOVE to fill in the answers…you just have to set up the scene!”

Her presentation included examples of other wonderful illustrators and their ability to tell a story with their pictures. Chris Van Allsburg, Kevin Henkes, Chris Ware, David Small, Carter Goodrich, John Klassen, Oliver Jeffers, and so many others.

She showed us examples of successful books regarding composition, the use of the page turn, as well as layout and composition of the page. One of the coolest things she showed us was how Maurice Sendak handled the entire book, “Where the Wild Things Are” in how from the beginning of the page, he starts with text on the left page , and Max illustrated in a smallish box on the right. Turn the page and he layed the text on the left again, but on the right, the illustration is slightly larger than the illustration from the first spread. If you have this book..break it out and see what happens…I guarantee you will LOVE what happens and how masterful Mr. Sendak has designed the book.  Let me know if you absolutely need to know what happens and I will let you know..but if you have the book, or can head to the library, I think it’s just worth the wait.

Antoinette also described how important the character is in a book, and how you must develop and INHABIT that character. She left us with a great image of a little girl wearing a plaid shirt, tutu, and cowboy boots standing next to a little girl wearing a uniform, wearing one sock, and holding the other sock in her hand. WOW, this told a lot about each character, right?!!
Antoinette truly showed her love of a good character, her passion for a great story or a beautiful piece of artwork and she left us with some great areas to consider and pay attention to: page layout, white space, design, simplify, clarity. 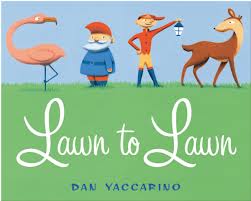 He asks, “Why?” Why do we do what we do? He said that there are a lot of really really bad books out there. He asks us to ask ourselves, “Why?”. I love that. His presentation touched on his favorite books and why they stand the test of time. He told us to READ, READ, READ the classics and lists Curious George, Harry the Dirty Dog, Ferdinand, Swimmy, etc. He describes how important characters are and how his presentation describes ONE way to create a picture book (and that there are multiple ways but he is simply describing one way to do so)…such as having an antagonist and a protagonist (i.e. in Cat in the Hat..who is the antagonist? The cat, right? Who is the protagonist..the boy. He describes that the book needs to have crisis, and then climax.

Dan showed his process from sketching (he even showed sketches he had done while flying to SF!) and thumbnails, to further concepts..just getting it all on paper, to layouts, to revisions and then final art. He showed how his concept for Lawn to Lawn evolved and what was kept in and edited out. The overwhelming thing that I came away from his presentation is how hard he works…and how that hard work is what (at least it seems to me) is what he loves to do. He seems as though he has multiple ideas bouncing around at all times and that it’s just waiting to pour onto his 8.5 x 11 sheets of paper.

I believe Dan said this…(not 100% sure but I wrote it down..):
“FEEL SOMETHING.” (evoke an emotional response) 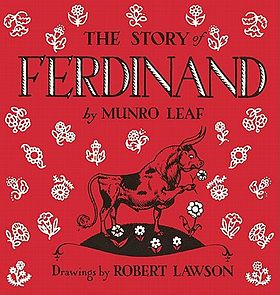 “Create a character that evokes an “awwwwww” out of a child or adult.” Dan stated this so well when he showed a picture of the cover of Ferdinand.

Why do we all “awwww?”..it’s because we care so much about this character!

We enjoyed so many other aspects in the day…Martha and Antoinette presented together, describing their project and other categories of artwork for picture books. (wonderful!), and then listened intently as we were all able to submit a piece of art for the “First-panel Look” in which the three presenters would comment on each of them. I held my breath while they talked about my “London Bus”. Yikes!

Other memorable quotes from the day:
“Fail faster to succeed sooner.”
“Persistence. Persistence. Persistence.”
“There are lots who can draw, but few who want to learn more.” (in regards to storytelling)
“Illustrators starting out need to cultivate with a two-pronged approach…work on your craft and network.”
~

Lastly, I was so fortunate to have my portfolio reviewed by Martha Rago. (an extra fee but well worth it!). Putting my portfolio together was hard work, but a lot of fun actually. I worked on as many personal pieces as I could throughout the year so that I had work to show for it for Illustrator Day. Ever since I heard Professor John Clapp’s criticism at a previous Illustrator Day, I’ve taken his words to heart and that is, that he stated that he saw people’s portfolios with old work that had been presented the previous year, and that that is something not to do…he said you must create and keep making new art! Talk about keen eye!! He surely has an amazing ability to provide feedback that one can use. With Amy June Bates’ words from the first Illustrator Day, “Draw. Draw. Draw. And then, draw some more!”, I have gained so much wisdom from these events!!

Perhaps it was unwise of me to show work that I felt was “weaker than others.” Well, for someone who works alone without other artists to bounce feedback off of, I decided to purposefully leave them in so that I could get feedback on them. I’m glad that I did as it reconfirmed for me that they were the weakest! I was open to all of her feedback..she stated “forgive me, but that’s not so pretty!”…and she also stated, “you need to do more of this!!”
She helped to define the areas that she saw as “weaker” than other areas..and that helped a great deal! Overall, I must say that there is SO much to take from a good portfolio critique…ask questions, be open to negative criticism, for feedback of all kinds first and foremost INFORMS! I look at my work and disagree with some of what she stated but it’s all ok..having her keen eye on my work has helped me to move in a clearer direction..and I’m happy to say that I’m optimistic and excited about the direction!

Here are two pieces in my portfolio..can you guess which she liked and didn’t like? 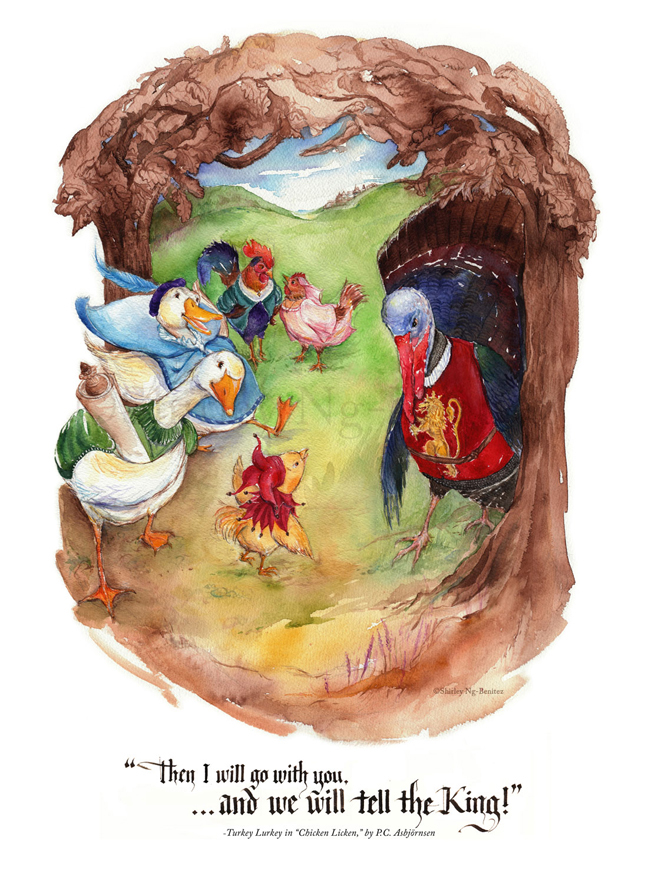 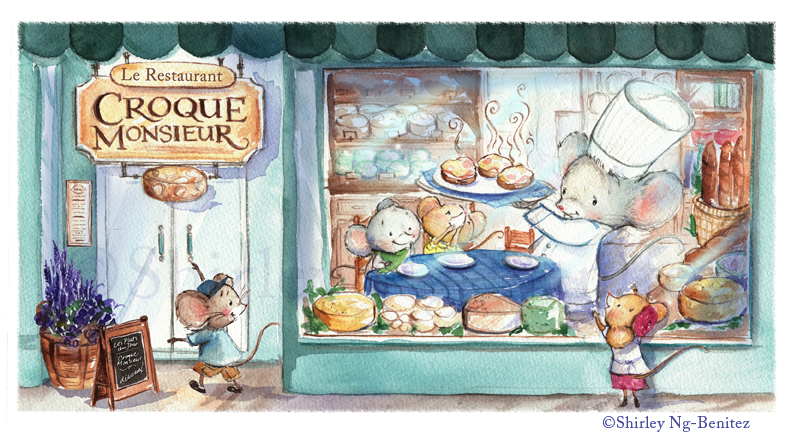 In another post, I’ll share more of the personal works I’ve created for my portfolio but I’ll conclude here. If you haven’t passed out already from this very long post, a heartfelt THANKS for reading, dear friends! Hope you all are well and let me know if you have any questions about anything you’ve read. ~ Shirley

For more of Shirley’s work be sure to check out her website and blog!