This week we have a guest post from Children’s Illustrator Mary Reaves Uhles. Mary has been a Children’s Illustrator for well over a decade. She’s been featured in numerous periodicals, magazines and books around the world! She also gets a special thumb up from me because she graduated a year ahead of me from Ringling College of Art and Design.  (Always repping for my fellow alumni!)

So join us this post as she goes over the elements that will really make your work stand out to that trade publishing art director. Character, Emotion and Story. Enjoy! 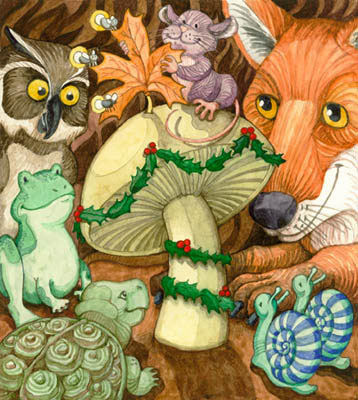 When you see the piece above you’d probably think, “what a cute and engaging bunch of woodland critters! I could see that in a kid’s book.” That’s certainly what I thought when I created it about 7 years ago. The piece above earned me a spot in Smart Writers’ New Voices competition and more than a few commissioned illustration pieces (though not of the trade picture book variety). To this day it hangs over my drawing table and, at the time I painted them, these cute woodland creatures occupied the place of honor at the end of my portfolio reserved for what I considered to be my best work.
Imagine my surprise then when I was told by an art director at Henry Holt that it was not actually a strong piece for getting work in children’s publishing. Too static he said, and all the characters have the same expression. It’s as if they posed waiting for the camera flash to go off.
Instead he pointed to this piece and explained why it was actually the strongest “trade” piece I had at the time: 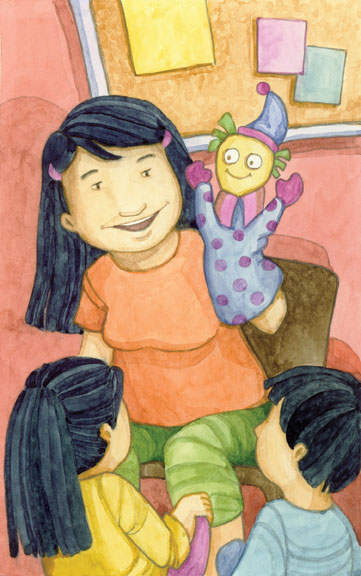 The girl’s pose was not static, she leaned into her audience giving a certain emotional tone, the children’s poses were dissimilar making them seem like individuals instead of a clump. He specifically pointed to the barrettes in the girl’s hair as evidence of her character. Tiny details like that, he said, were what told a story.
Character, emotion, and story – it sounds simple but these are the three elements I most often hear missing when trade publishing art directors reject a portfolio. Trade publishing is an industry term but the general public knows trade as the hardcover, jacketed picture books that are sold on the shelves of B&N or a cozy local bookstore. Unlike mass market publishing (think Wal-Mart and Target, licensed characters and novelty books,) trade books aim to be a notch higher on the literary scale. Trade seeks to introduce readers to a more complex reading experience through higher quality writing and art. (We made a post about this here.)
So back to character, emotion and story. A good way to approach this trifecta is to think of yourself as a film director and each piece as your movie scene. In a movie the actors, costumes, scenery and lighting are designed a certain way, all to inform the audience about the character. What details can you put in the background or in your character’s “wardrobe” to tell the audience about who they are? How would you change the light source and point of view to make the character feel adventurous, quiet, or silly?
Likewise think about what expressions your characters have, especially in a portfolio grouping. While some stories have happy endings, they very rarely have happy beginnings and middles. Good stories have conflict, so too should your characters. Make them sad, angry, bored, anything that adds drama. Showcase your illustrative story telling skills by picking one character and developing her emotion over a series of pages: she wakes up sleepy, then gets scared of a giant spider by the bed, then angry at the spider for waking her up, then determined to do something about the spider. Think about how her face and body language would change as you draw these emotions. As the director of the movie how would you tell your character to move in front of the camera? What does her face look like when she’s ready for her close-up?
Story is putting character (created by the actors, aided by their background, costumes and lighting) and emotion together to make the reader wonder what’s going to happen next. Think of your illustration as a DVD on pause. A stranger wanders into the room and sees the “frozen” piece of your movie, do they want to push play and see what happens next? If this illustration were the spread of a book would it make the reader want to turn the page? Even a portfolio of various pieces can have its own story by choosing illustrations with multiple points of view, light sources, and expression. Think about character, emotion and story as you select the order of the pieces. Create a flow that will make an art director want to turn the page or click on the next thumbnail.
After the eye-opening critique I mentioned above, I set out to overhaul my work so that it better exhibited character, emotion and story. More than a few years and rejected pieces later I finally have a portfolio, which was recently critiqued by the same art director, that succeeds at this goal. Take a look at the following two pieces: 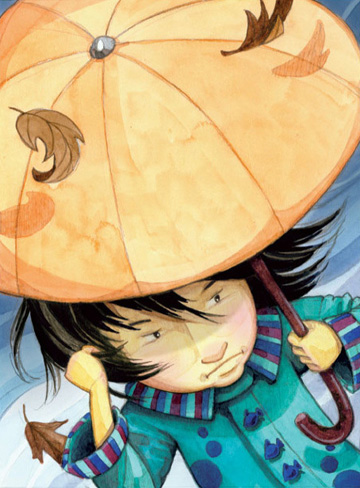 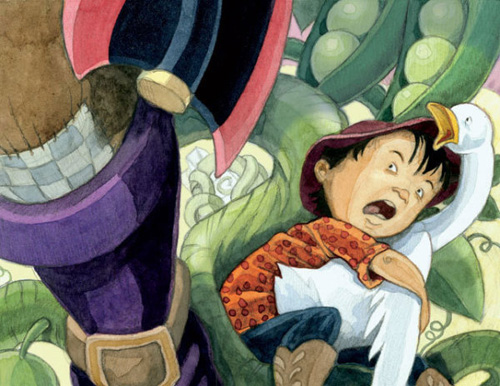 The characters are similar to the puppeteer above, both lean into the picture frame moving the pose away from static. But the girl in the rain has even more details in her wardrobe that tell us about what she likes and even her age. The background elements give us a sense of atmosphere, not just a generic setting. Jack and the giant have details that tell us where they are and that one of the characters is a giant. But most importantly neither character is just posing patiently for a camera flash. The design of these illustrations suggests that there is more to come. Character, emotion, and story, with these 5 star story telling tools loaded into my pencil, my own trade books will be ready for a cozy bookstore.

* to read the story of my two portfolio reviews mentioned above see my blog here:
http://www.fabulousillustrator.blogspot.com/2007/11/fear-and-loathing-in-nashville-garage.html
and here:
http://www.fabulousillustrator.blogspot.com/2012/06/why-was-my-saturday-awesome-heres-why.html
For more of Mary’s work be sure to stop by her website, blog or etsy page!